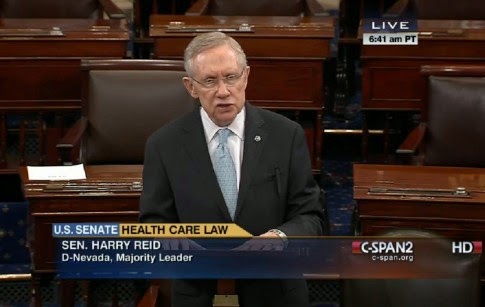 “My counterpart, the senior senator from Kentucky, will address the Senate probably after I finish. In his home state of Kentucky, 360,000 people have signed up for coverage under the Affordable Care Act. Three hundred and sixty thousand. Over a quarter million Kentuckians who did not have insurance now have health care under the Affordable Care Act. Or, in other words, Obamacare has reduced the uninsured population in Kentucky by 40 percent. I wonder when my friend from Kentucky will explain to the 270,000 Kentuckians how he plans to repeal the law without stripping their new health benefits.”
That sounds like a great success, but Dingy Harry left out one key statistic.

With sign-ups reaching 1,000 people an hour, Kentucky surpassed 360,000 enrollees by Monday’s midnight deadline for the Affordable Care Act’s first open-enrollment period.[...]
The goal of the ACA was to help cover 48 million Americans, including 640,000 in Kentucky, who lack health insurance.
Although the state set no official first-year goal, its 360,000-plus sign-ups — 75 percent of whom were previously uninsured — represents a sizable chunk.[...]
Final figures are expected from the state Tuesday.
So far, about 80 percent of enrollees qualified for expanded Medicaid, leading some critics to question the added costs to federal budgets. The rest bought private plans on the exchange, where people are eligible for subsidies, based on their income.

80% signed up fro free Medicaid; proving once again free stuff is popular. That means only 72,000 actually signed up to pay. Most of them likely got a large subsidy. The 80% Medicaid number also explains why 75% of KY enrollees were previously uninsured. Most of these people were probably already "getting a check" from the government as they say in Eastern Kentucky.
Posted by Bluegrass Pundit at 6:44:00 AM