Virginia Gov. Terry McAuliffe (D) vetoes bill that passed House and Senate with only 1 no vote... 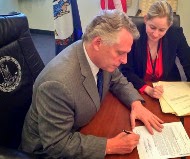 Virginia Governor Terry McAuliffe (D) vetoed legislation Monday that passed unanimously in the House of Delegates and 38 to 1 in the state Senate that would have given red light camera ticket recipients the option of seeking an extra layer of due process.
"Any finding in a district court that an operator has violated an ordinance adopted as provided in this section shall be appealable to the circuit court in a civil proceeding," House Bill 1040 stated.[...]
To defeat all legislation that would affect red light cameras, Redflex Traffic Systems of Australia hired the lobbying firm of Hunton and Williams to influence the General Assembly and the McAuliffe administration. The firm showered the newly sworn in governor with campaign cash, including $25,000 for his inauguration, $10,599 for his gubernatorial run, $10,000 to the state Democratic Party and $17,836 for McAuliffe's lieutenant governor and attorney general, plus their inaugural festivities.