Arlen Specter's reelection bid is in trouble. He is trailing 5 points behind the potential Republican contender and 52% of voters have an unfavorable assessment of the former GOP senator who became a Democrat in April.

The latest Rasmussen Reports telephone survey of Pennsylvania voters shows 45% would vote for Toomey if the election were held today. Forty percent (40%) would vote for Specter, while six percent (6%) prefer a third option. Nine percent (9%) are undecided.

Here is why Specter left the Republican Party.

Republican National Committee Chairman Michael Steele cited political motivations for this move. "Let's be honest -- Sen. Specter didn't leave the GOP based on principles of any kind. He left to further his personal political interests because he knew that he was going to lose a Republican primary due to his left-wing voting record." 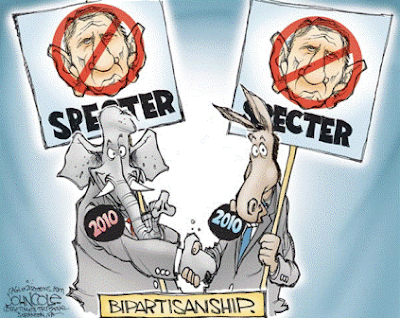 I wish you guys would take him back.

"I wish you guys would take him back."