Rasmussen: Obama's Presidential Approval Index is Back Down to -13

The Rasmussen Reports daily Presidential Tracking Poll for Wednesday shows that 27% of the nation's voters Strongly Approve of the way that Barack Obama is performing his role as President. Forty percent (40%) Strongly Disapprove giving Obama a Presidential Approval Index rating of -13. That’s just a point above the lowest level ever recorded for this President. It’s also the sixth straight day in negative double digits, matching the longest such streak (see trends). 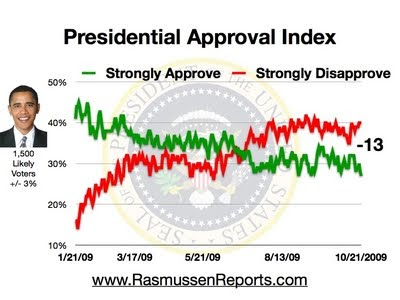