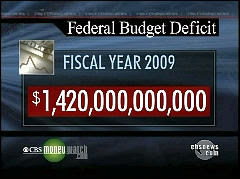 On October 7, the Congressional Budget Office reported that Obama's deficit had ballooned to a $1.4 trillion for his first year. Katie Couric and CBS News failed to report this information. Now that the White House admits the deficit, they are willing to report it like any self respecting state run media should.

Couric disclosed the news in a brief item that never mentioned The One by name: “It's the biggest IOU Uncle Sam has ever written. Government figures out today show for the last fiscal year, which just ended, the United States spent a record 1.4 trillion dollars more than it took in. That's three times more than the year before.”