WaPo Tries to Prop Up Public Option with Phony Poll

The Washington Post is touting a poll that shows 57% of Americans support a public run option for health care reform.

As Democratic congressional leaders and White House officials work to shape health care bills that will go to the House and Senate floors, a new Washington Post-ABC News poll shows that support for a government-run health plan to compete with private insurers has rebounded from its summertime lows and now wins clear majority support from the public.

On the issue that has been a flash point in the national debate, 57 percent of all Americans now favor a public insurance option, while 40 percent are opposed. Support has risen since mid-August, when a bare majority, 52 percent, said they favored it. (In a June Post-ABC poll, support had been at 62 percent.)


Hidden in the last paragraph on page two is this nugget:

Only 20 percent of adults identify themselves as Republicans, little changed in recent months, but still the lowest single number in Post-ABC polls since 1983. Political independents continue to make up the largest group, at 42 percent of respondents; 33 percent see themselves as Democrats.

Only 20% of the respondents to this poll were Republicans. The most accurate pollster during the 2008 election cycle finds that 32% of voters now identify themselves as Republicans. 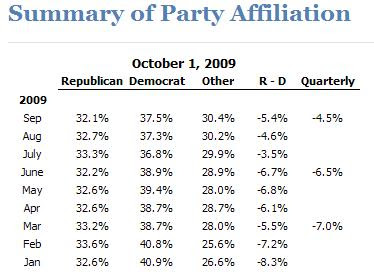 Graphic from Rasmussen.
Posted by Bluegrass Pundit at 9:17:00 PM