The Joint Congressional Committee on Taxation has come to a shocking conclusion about the excise tax in the Baucus plan. The tax will raise prices for insurance policies and depress wages as a result.

The Joint Congressional Committee on Taxation has analyzed the excise tax in the Baucus plan and come to the logical conclusion that it will raise prices for insurance policies. In two letters issued yesterday, the JCT acknowledged that the increased premium costs for health-insurance plans that qualify for the excise tax will increase costs to employers offering them, depressing wages directly or indirectly as a result, depending on whether they impose the total cost increase on employees. The second letter demonstrates that the effect of the Baucus plan and its disappearing subsidies on lower-income workers is to force them into a higher tax bracket, disincentivizing gains in employment.


First, let’s look at the impact the Baucus plan has on effective marginal tax rates for Americans: 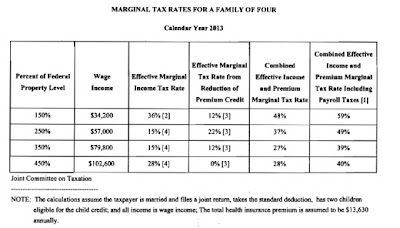 If this lowers insurance rates then it's a wash anyway BP. And if it makes health insurance available and affordable to all that's a good thing also.


Sorry you had to go to moderation BP. Some idiots messing in your comment section?

"Sorry you had to go to moderation BP. Some idiots messing in your comment section?"

The internet is full of trolls and some came here. I also have had to delete a couple of comments that might be considered racist. I will try to moderate as quickly as my day job allows.