Republicans and Independents Want to Win the War in Afghanistan. Democrats are unsure. 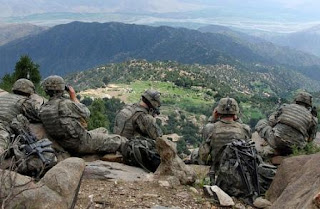 A plurality of 48% of Americans favor a surge to try and win the war in Afghanistan. A majority of Republicans and almost half of Independents favor sending more troops. Fifty-seven percent of Democrats oppose the idea.

The survey of 927 adults found that a plurality of 48% favors sending more troops and resources to Afghanistan. That's a sharp reversal from September, when Americans opposed the idea, 55%-35%.

Gen. Stanley McChrystal, commander of U.S. and NATO forces in Afghanistan, has reportedly asked for another 40,000 troops to help control rising violence.

President Obama is now unsure if he wants to commit more troops to Afghanistan. This is in sharp contrast to Presidential candidate Obama who criticized former President Bush for not sending enough troops and resources to Afghanistan.

Democrat Obama, a senator from Illinois who has long called for more U.S. troops in Afghanistan, said at a news conference in Ohio yesterday that Bush "is moving in the direction of the policy that I have advocated for years." But he said the plan also "comes up short" because "it is not enough troops and not enough resources, with not enough urgency."

President Obama now has the power to implement the policy he advocated as a Senator. What he lacks is the spine.
Posted by Bluegrass Pundit at 4:54:00 PM