Is President Obama a Socialist? 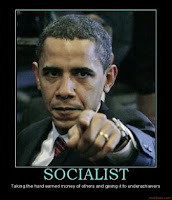 Although the GOP has accused President Obama of driving the US towards socialism, President Obama has denied that he is a socialist. He has a hard time admitting it is even a "serious" question. Many on the left ridicule those who call Obama a socialist and say they don't know the definition of socialism. Here is the traditional definition from Dictionary.com:

1. a theory or system of social organization that advocates the vesting of the ownership and control of the means of production and distribution, of capital, land, etc., in the community as a whole.
2. procedure or practice in accordance with this theory.
3. (in Marxist theory) the stage following capitalism in the transition of a society to communism, characterized by the imperfect implementation of collectivist principles.

What does the largest socialist organization (DSA) in America have to say:

Democratic Socialists believe that both the economy and society should be run democratically—to meet public needs, not to make profits for a few. To achieve a more just society, many structures of our government and economy must be radically transformed through greater economic and social democracy so that ordinary Americans can participate in the many decisions that affect our lives.

More from the Democratic Socialists of America website (pdf):

Democratic socialists do not want to create an all-powerful government bureaucracy. But we do not want big corporate bureaucracies to control our society either. Rather, we believe that social and economic decisions should be made by those whom they most affect.

Today, corporate executives who answer only to themselves and a few wealthy stockholders make basic economic decisions affecting millions of people. Resources are used to make money for capitalists rather than to meet human needs. We believe that the workers and consumers who are affected by economic institutions should own and control them.

Social ownership could take many forms, such as worker-owned cooperatives or publicly owned enterprises managed by workers and consumer representatives.

Socialism in America today means means government ownership or control of the means of production in order to make money for social needs.

Barack Obama's first book was titled "Dreams of My Father." Since Obama's father abandoned him at an early age, he should not have been a major influence to Barack Obama. For completeness, it should be noted that Barack Obama Sr. had socialist/communist leanings. In 1965 Obama Sr. wrote an important paper titled "Problems Facing Our Socialism." In this paper, Obama Sr. put himself on the side of communist-allied leader Oginga Odinga against pro-Western 'third way" leader Tom Mboya in Kenya.

Brarck Obama was raised by his mother and his maternal grandparents. What were their political views?

Barack Obama's mothers political views are not well documented. It is known she was a Adlai Stevenson liberal and cultural anthropologist. She went to a high school ran by an admitted communist. While there, she was required to read "Communist Manifesto" by Karl Marx and defended this philosophy in debates.

What about Obama's maternal grandparents Stanley and Madelyn Dunham? They have been reported in the mainstream media as strict Methodists. However, during Ann's high school years they went to East Shore Unitarian Church in nearby Bellevue, nicknamed 'the little Red church on the hill,' for their left leaning sympathies and support of Communist China. As reported in the preceding paragraph, the Dunham's sent their daughter to a High School ran by an admitted communist. It is also well known that Stanley Dunham was good friends with radical activist, journalist and suspected communist Frank Marshall Davis. In his book "Dreams of My Father" Barack Obama tells how Davis mentored him when he was dealing with racial issues.

The above biographical information indicates Barack Obama had a very left of center upbringing.

After college, Barack Obama moved to Chicago where his association with left leaning groups like ACORN are well known. Obama's association with Bill Ayers has also been documented. Ayres was a former member of the terrorist Weatherman group, a Communist-driven splinter faction of Students for a Democratic Society. When Obama ran for State Senate in Illinois in 1995, he was endorsed by the Democratic Socialist of America splinter group "New Party." Obama's "Fight the Smears" website denies he was ever a member of or sought endorsement of the socialist "New Party." It is true that Obama has always ran as a Democrat. However, photos and literature from 1995 identify Obama as a "New Party" member. Since he ran unopposed in 1995, it is difficult to explain why he attended "New Party" events if he wasn't a member. He didn't need the votes.

What has President Obama done since being elected that could be considered socialist? He appointed a known Communist as his green jobs czar. Also, Obama has greatly expanded the takeover of major banks that was begun during the final months of the Bush administration. Under Obama, the government has taken over General Motors, America's largest auto manufacturer. The government forced Chrysler to be turned over to the workers in the UAW.

President Obama thinks company profits should be secondary to the public interest. Let's remember how the Democratic Socialists of America describe socialism:

Democratic Socialists believe that both the economy and society should be run democratically—to meet public needs, not to make profits for a few.


President Obama was born of and raised by leftist, socialists and/or communists. His actions as President indicate the apple has not fallen far from the tree.

This is a great post BP:
You did alot of great research. Everyone who can
read this and connect the dots knows WITHOUT A DOUBT, obama is the VERY definition of Socialist.
He is just following his mendacious nature in lying about it. God Help Us All.

Obama is a COMMUNIST! It's a waste of time to use watered down terms to describe him. The visible portion of Obama's plan is only the tip of the iceberg, don't forget that the rest is there, just beneath the surface.

This is well written! Thank you!
Soetebeer

Not to spoil everyone's fun but as convincing as some may take your arguments to be; they are not valid. What I mean is that you have taken the evidence too far; your conclusion does not follow from your evidence. It does not follow that because his parents, grandparents, etc had socialist leanings that he is a socialist. In fact by signing the bailout into law he proved was no socialist; he was seeking to save capitalism.

"It does not follow that because his parents, grandparents, etc had socialist leanings that he is a socialist. In fact by signing the bailout into law he proved was no socialist; he was seeking to save capitalism."

The bank bailout increased government control of the financial sector. How does that support capitalism? Even socialist countries have banks, they are just controlled by the government.

On a scale of 0 to 10 where communism is 0, socialism is 5 and capitalism is 10, Democrats would say they are 7 though in fact they're 4 and the Republicans who were once 8 have slid to around 6. Hence the Tea Party...