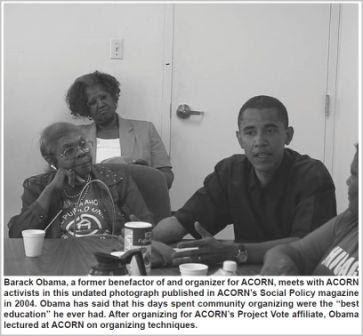 Barack Obama has a long history of ties to ACORN. ACORN was well acquainted with Obama before he ever ran for the State Senate in Illinois.

The Cleveland Leader first reported that ACORN’s former board member Toni Foulkes detailed some of this collaboration in the Winter 2003-Spring 2004 issue of the journal Social Policy.

As Foulkes wrote, “We have invited Obama to our leadership training sessions to run the session on power every year, and, as a result, many of our newly developing leaders got to know him before he ever ran for office. Thus, it was natural for many of us to be active volunteers in his first campaign for State Senate and then his failed bid for U.S. Congress.” Foulkes added: “By the time he ran for U.S. Senate, we were old friends.”

Although Barack Obama was never a staff attorney for ACORN, PolitiFact agrees Obama did represent ACORN in court.

ACORN PAC’s representatives went through an extensive process of interviewing each of the major Democratic candidates. ACORN is a national anti-poverty organization which has hundreds of thousands of members in low- and moderate-income neighborhoods in 104 cities.

“Last night, Sen. Obama received the more than necessary two-thirds of the majority needed from our elected national leadership to secure the endorsement,” said Maude Hurd, ACORN’s National President. “Over the past months, we have worked with the leading candidates; ACORN’s members have deep appreciation and respect for Senators Clinton and Edwards and their work on behalf of our communities. What it came down to was that Senator Obama is the candidate who best understands and can affect change on the issues ACORN cares about like stopping foreclosures, enacting fair and comprehensive immigration reform, and building stronger and safer communities across America.”

Barack Obama used to speak highly of his relationship to ACORN according to his website Organizing for America.

When Obama met with ACORN leaders in November, he reminded them of his history with ACORN and his beginnings in Illinois as a Project Vote organizer, a nonprofit focused on voter rights and education. Senator Obama said, "I come out of a grassroots organizing background. That's what I did for three and half years before I went to law school. That's the reason I moved to Chicago was to organize. So this is something that I know personally, the work you do, the importance of it. I've been fighting alongside ACORN on issues you care about my entire career. Even before I was an elected official, when I ran Project Vote voter registration drive in Illinois, ACORN was smack dab in the middle of it, and we appreciate your work.”

U.S. Sen. Barack Obama’s presidential campaign paid more than $800,000 to an offshoot of the liberal Association of Community Organizations for Reform Now for services the Democrat’s campaign says it mistakenly misrepresented in federal reports.

An Obama spokesman said Federal Election Commission reports would be amended to show Citizens Services Inc. — a subsidiary of ACORN — worked in “get-out-the-vote” projects, instead of activities such as polling, advance work and staging major events as stated in FEC finance reports filed during the primary.

While Barack Obama was a member of ACORN in his youthful community organizing days, using the Community Reinvestment Act, designed to encourage banks to make loans to high-risk borrowers, he encouraged ACORN to abuse the law by forcing banks to make hundreds of millions of dollars in 'sub prime' loans to minorities with bad or no credit. Using charges of racism and threats to use CRA to block business expansions ACORN extracted hundreds of millions of dollars in loans and contributions from America’s financial institutions. Other things that ACORN did were agitate for higher minimum wages, attempt to thwart school reform, try to unionize welfare recipients and organize voter registration drives. In 2006 for example, their voter registration drive in Washington produced 1,800 new voters of which 1,794 names submitted were fake. The secretary of state called it the “worst case of election fraud in our state’s history.”
Cybercorrespondent
http://cybercorrespondent.blogspot.com