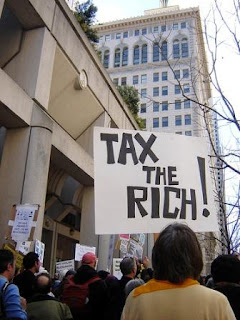 According to the Manhattan Institute, 41 percent of New York state income taxes are paid by the wealthiest 1% of New Yorkers. Americans no longer have the geographic loyalty they once had. The wealthy are voting with their feet and moving to locations with lower tax rates. This will make economic recovery even more difficult for hard hit states like New York. It looks like New York Gov. David Paterson and Lt. Gov. Richard Ravitch are starting to get the message.

"You heard the mantra, 'Tax the rich, tax the rich,' " Gov. David Paterson said Wednesday at a gathering of newspaper editors at an Associated Press event in Syracuse. "We've done that. We've probably lost jobs and driven people out of the state."

"People aren't wedded to a geographic place as they once were. It's a different world," New York Lt. Gov. Richard Ravitch said.