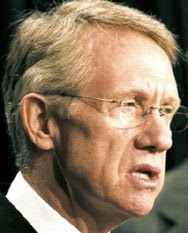 Senate Majority Leader Harry Reid is already demanding changes to Senator Baucus bipartisan partisan health care reform bill. Reid said, "Let me be very clear, I will not bring a health insurance reform bill to the Senate floor that is not good for Nevada.” Harry Reid isn't supporting Obamacare? Perhaps Maxine Waters should probe him for racist thoughts and Rep. Hank Johnson can fit him with a white hood.

The Las Vegas Sun reported the story.
Posted by Bluegrass Pundit at 4:19:00 AM

As I point out in my editorial on SpecialOpsAndNews.com, this entire "race" card issue - now anointed by Jimmy Carter - is part of the liberal plan to distract the American people from the failing Obama health care bill - which will cost Obama serious political clout when it's finally taken off of liberal life support.