The US Sold us out

Poland was very offended at the scrapping of the missile defense in Europe. The Polish Prime minister refused to take Secretary of State Hillary Clinton's phone call:

Polish Prime Minister Donald Tusk confirmed today that he declined last night to take a call from the U.S. informing him of the decision to scrap planned missile-defense bases in his country.

Two U.S.-based sources close to the Polish government said Thursday that Tusk also rejected a call from Secretary of State Hillary Clinton — on the grounds that, as the head of the government, he should speak to the president.

"Hillary called — and the reason he turned it down was because of protocol," said a source.

The headline from Polish tabloid eFact.pl:

Treason! Russia, the U.S. sold us. 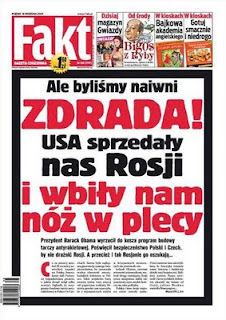 Vladimir Putin was happy about the decision:

SOCHI, Russia (Reuters) - Russian Prime Minister Vladimir Putin said on Friday a decision by the United States to scrap plans for a missile defense shield in Europe was positive.

Putin, speaking to investors in the Black Sea resort of Sochi, said he now expected the United States to back a bid by Russia, Belarus and Kazakhstan to join the World Trade Organisation.

"I expect that after this correct and brave decision, others will follow, including the complete removal of all restrictions on the transfer of high technology to Russia and activity to widen the membership of the World Trade Organisation to (include) Russia, Kazakhstan and Belarus," Putin said. 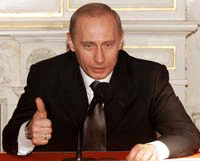