Senate Votes 83-7 to Strip ACORN of All Federal Funding 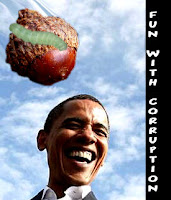 The Senate has voted by an overwhelming majority to strip all federal funding from ACORN. Senator Johanns' amendment (Johanns #2355) has passed. This came on the wake of three straight days of BigGovernment.com’s video exposés of ACORN offices in Washington DC, New York City, and Baltimore offering tax help to a pimp and prostitute wanting to set up a brothel with underage illegal immigrant girls. The latest video is here. Seven Senators voted against the amendment. Nine failed to vote.


Here are the NAYs and Not Voting:

Senator Mike Johanns (R-NE) introduced an amendment to the HUD and Transportation appropriation bill to strip ACORN of all federal funding. A week ago, Johanns wouldn’t have gotten the amendment to the floor. Today, however, after three straight days of BigGovernment.com’s video exposés of ACORN offices in Washington DC, New York City, and Baltimore offering assistance to pimping, tax evasion, and trafficking in underage Salvadorean girls, Johanns not only got his vote — but he got an impressive bipartisan showing. The Senate passed the Johanns amendment 83-7.