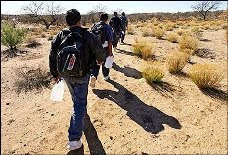 More than 20 liberal House Democrats have sent two letters pushing for illegal immigrants to be allowed some level of participation in the health care reform legislation.

The Democrats, trying to stiffen their party's spines on the contentious issue, say it's unfair to bar illegal immigrants from paying their own way in a government-sponsored exchange. Legal immigrants, they say, regardless of how long they've been in the United States, should be able to get government-subsidized health care if they meet the other eligibility requirements.

Remember when, a short time ago, Obama and Democrats claimed illegals went covered under Obamacare, but Republicans countered there was no specific language in the bills to prevent illegal immigrants from participating? This prompted the "You lie" shout out by Rep. Joe Wilson. Later, President Obama quietly issued a policy drop supporting specific language in the bills to prevent illegals from being covered. Republicans suspected the lack of language barring illegals was a ruse to allow them to participate at a later date by a bureaucratic decision. La Raza is confirming this suspicion by asking that language be stricken from the bill.

The National Council of La Raza launched its own "flood their voice mail" campaign last week to put pressure on Mr. Baucus to expand coverage in his proposal to include all legal immigrants and to drop verification language in the legislation that would prevent illegal immigrants from obtaining coverage.