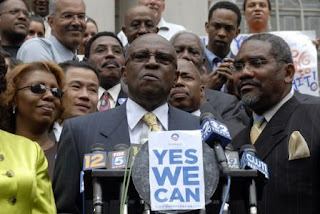 California Republican Representative Darrell Issa, the ranking Republican on the House Oversight and Government Reform Committee, is trying to subpoena the Bank of America to see if there are recordings between Countrywide and some of the politicians who may have received the mortgages. BoA bought Countrywide for $4 Billion in 2008. The committee's chairman, New York Democratic Rep. Edolphus Towns, is refusing that request. Reportedly, Rep. Towns received two VIP loans under the Countrywide program.

According to the Journal: "So far, the committee's chairman, New York Democratic Rep. Edolphus Towns, has turned down that request."

I'm glad that the corruption is now being exposed...I just hope that we won't get to the point that it becomes ho-humm-because there is so much of it and its exposure has become an every day occurrence...
Carol-CS