AP Fact Check: Enforcing Coverage with a Fine is a Tax 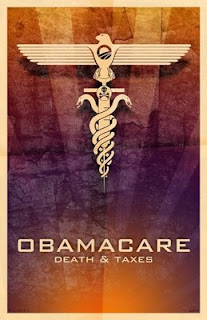 Over the weekend, President Obama sparred with ABC's George Stephanopoulos about whether fining people to enforce mandated health insurance coverage is a tax. Stephanopoulos read Obama the dictionary definition of a tax to bolster the argument the fine actually should be considered a tax. Obama said:

OBAMA: No. That's not true, George. The… ?for us to say that you've got to take a responsibility to get health insurance is absolutely not a tax increase. What it's saying is, is that we're not going to have other people carrying your burdens for you anymore than the fact that… right now everybody in America, just about, has to get auto insurance. Nobody considers that a tax increase. People say to themselves, that is a fair way to make sure that if you hit my car, that I'm not covering all the costs.

AP agrees with George Stephanopoulos and Obama's critics. It is a tax.

WASHINGTON – Memo to President Barack Obama: It's a tax. Obama insisted this weekend on national television that requiring people to carry health insurance — and fining them if they don't — isn't the same thing as a tax increase. But the language of Democratic bills to revamp the nation's health care system doesn't quibble. Both the House bill and the Senate Finance Committee proposal clearly state that the fines would be a tax.

And the reason the fines are in the legislation is to enforce the coverage requirement.

"If you put something in the Internal Revenue Code, and you tell the IRS to collect it, I think that's a tax," said Clint Stretch, head of the tax policy group for Deloitte, a major accounting firm. "If you don't pay, the person who's going to come and get it is going to be from the IRS."

The syntax of the bill itself clearly states on page 29, the very first sentence: "The consequence for not maintaining insurance would be an excise tax."

Obama has either not read the bill or is not being honest.

The Big Surprise in all this was that Step-on-all-of-us actually challenged the Chosen One on camera. In this instance, the tax in question was supposedly being levied on those that could afford insurance but wouldn't purchase it.

The formerly main-stream media will work themselves into a corner with this argument though, as they will have to address the next set of fees or fines to emerge as 'taxes.' Failing to do that will only highlight their double-standard.