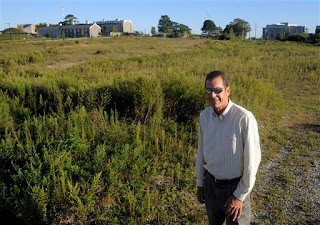 In 2005 the Supreme Court rules 5-4 that local governments could seize private property for nonpublic projects. The landmark care was Kelo v. New London. The town of New London Connecticut wanted to seize Susette Kelo's home for a multimillion-dollar private development. Kelo, and Americans who value property rights, lost that case. The case resulted in an unsuccessful effort to seize Supreme Court Justice David Souter's New Hampshire home by eminent domain and build an inn. The 3,169 new jobs and $1.2 million a year in tax revenues promised by New London officials have never materialized. The property is now a vacant lot populated by Feral cats and thistle. See above picture.

From AP via Google News:

There are a few signs of life: Feral cats glare at visitors from a miniature jungle of Queen Anne's lace, thistle and goldenrod. Gulls swoop between the lot's towering trees and the adjacent sewage treatment plant.

But what of the promised building boom that was supposed to come wrapped and ribboned with up to 3,169 new jobs and $1.2 million a year in tax revenues? They are noticeably missing.