Obama wants to fight corruption as long as it is overseas 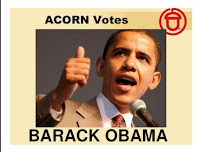 President Obama has taken a strong stand against corruption overseas. In a July 11th speech in Ghana, Obama exhorted Africans to rid themselves of corruption. Candidate Barack Obama had a lot to say about fighting corruption. Here is a screen shot of a foreign policy fact sheet from Barack Obama's Organizing for America website.

From Organizing for America:

Too often when we talk about corruption, we talk about it in the context of our assistance. When U.S. taxpayer money is involved, we absolutely must make sure that this money is not wasted or illicitly spent.

Americans might think President Obama would be concerned about corruption closer to home, even if it involves his friends at ACORN. That isn't true. In an interview on ABC’s This Week, Obama said this about the ACORN corruption scandal:

George, this is not the biggest issue facing the country. It’s not something I’m paying a lot of attention to.