Post Office Pays Thousands of Employees to Do Nothing 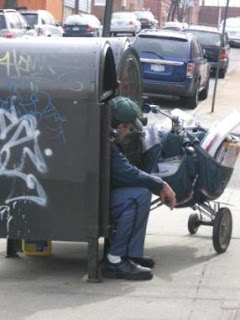 Democrats in Congress are planning a $4 billion bail out of the Post office. Meanwhile, mail volume is down 12.6 percent. Instead of transferring employees or laying them off, the Post Office is paying thousands of employees to do nothing.

The U.S. Postal Service, struggling with a massive deficit caused by plummeting mail volume, spends more than a million dollars each week to pay thousands of employees to sit in empty rooms and do nothing.

It’s a practice called “standby time,” and it has existed for years — but postal employees say it was rarely used until this year. Now, postal officials say, the agency is averaging about 45,000 hours of standby time every week — the equivalent of having 1,125 full-time employees sitting idle, at a cost of more than $50 million per year.

Soon, bureaucrats like those running the Post Office will be in charge of your health care if Obamacare passes.
Posted by Bluegrass Pundit at 7:33:00 PM