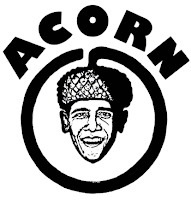 The Justice Department's inspector general is looking into ACORN to see if they received any DOJ grant money. Don't expect too much from Obama's DOJ. After all, they dropped the charges against the Black Panther's accused of voter intimidation prosecution.

The Justice Department's inspector general has agreed to investigate whether ACORN has applied for or received any DOJ grant money, in the wake of bipartisan criticism of the community activist group's operation.