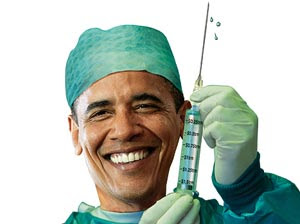 Senate Finance Committee Chairman Max Baucus unveiled what was supposed to be a bipartisan health care reform plan. However, he has failed to get any Republican to support his plan so far.

Senate Finance Committee Chairman Max Baucus unveiled a much-anticipated health-care reform plan Wednesday that would require nearly all Americans to carry health insurance while barring insurance companies from discriminating against people based on their health status or denying coverage because of preexisting conditions.

Although Baucus held more than 100 hours of meetings over several weeks with a bipartisan group of Senate health-care negotiators known as the "Gang of Six," he was unable to secure a public endorsement from any of the group's GOP members -- or any other Republicans -- before releasing the plan.


At least one liberal Democrat is refusing to support the plan.

Democratic Sen. Jay Rockefeller, a member of the Finance Committee, said on a conference call Tuesday afternoon that he would not support the health care compromise proposal of committee chairman Democrat Max Baucus.

"There is no way in its present form I will vote for it," Rockefeller said in a call co-organized with the liberal Campaign for America's Future. Though he said he's worked closely with Baucus in the past, he said, "I cannot agree with him on this bill."

Rockefeller cited the lack of a government-run plan as the main reason for he couldn't support it, but also said the proposed tax on high-end health plans would affect every coal miner in West Virginia.

Democrats are sharpening their knives in preparation for the committee mark up.

Baucus should expect to see many amendments from Democratic members of the committee, said Sen. John Kerry (D-Mass.).

“There will undoubtedly be amendments in the committee process – and probably a lot of them,” Kerry said. “There’ll be some big fights over different components of this.”

Asked whether he could vote in favor of Baucus’s draft proposal that senators discussed in their meeting Monday evening, Kerry said: “I’m glad I don’t have to answer that because I know it’s not going to be the bill that we’re going to vote on because we are going to amend, we are going to have a tug-of-war still.”

Yes, wasn’t that the plan to begin with…it was to distribute all the wealth of the rich..and you know, Hollywood people have all their lawyers so they don’t get hitched (pay high taxes) so who is left, we, the middle class…so then we barely make it…Well, we can think who??? You guess!!! Tax increase by our lovely government. Thanks a lot.