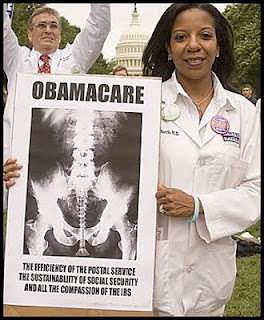 At a mark up hearing of the Joint Committee on Taxation, Sen. John Ensign (R-Nev.) asked the committee's chief of staff, Thomas Barthold, what would happen if Americans failed to pay the $1900 tax for not taking Obamacare.

Under questioning from Sen. John Ensign (R-Nev.), Barthold said the IRS would "take you to court and undertake normal collection proceedings."

Ensign pursued the line of questioning because he said a lot of Americans don't believe the Constitution allows the government to mandate the purchase of insurance.

Sen. John Ensign (R-Nev.) now has written confirmation that Americans could face up to a year in jail for rejecting Obamacare and not paying the tax.

Violators could be charged with a misdemeanor and could face up to a year in jail or a $25,000 penalty, Barthold wrote on JCT letterhead. He signed it "Sincerely, Thomas A. Barthold."