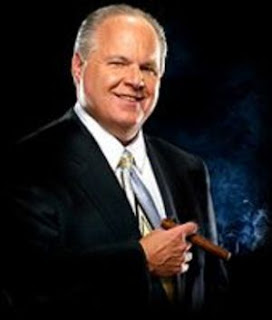 The Huffington Post has pulled the fake Limbaugh "slavery" quotes from a 2006 Jack Huberman article.

Editor's Note: An earlier version of this post contained quotes attributed to Rush Limbaugh, which Limbaugh has since denied making. As is our policy when a fact in a blog post is called into question, we gave its author 24 hours to substantiate the quote. Since he has not been able to do so, the quotes have been deleted from the post.

CNN's Sanchez is backpedaling, but he is doing it on Twitter:

i’ve know rush. in person,i like him. his rhetoric,however is inexcusably divisive. he’s right tho. we didn’t confirm quote. our bad.

Expect more retractions and lame halfhearted apologies to come later.
Posted by Bluegrass Pundit at 5:44:00 AM

Such a freaking disgrace. I hope Rush sues them.

Slander with a capital "S". I hope Rush wins in the end.

I heard Rick Sanchez say that on his show yesterday. Maybe you should start verifying before you post, too. And Teresa, you're funny. Good sense of humor.