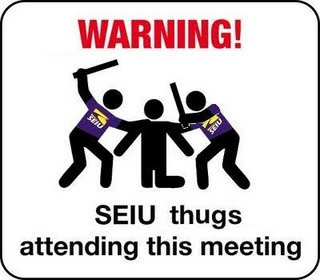 The Service Employees International Union (SEIU) is a group of thugs with strong ties to ACORN. They helped Democrats AstroTurf many of their August town halls. Barack Obama has a log history of freindship to the SEIU and once vowed to "paint the nation purple." The SEIU made a $61 million investment in Barack Obama and it looks like it is paying off.

As far as I can tell, THE Andrew Stern was the top outside visitor to the White House with approximately 20 visits, or about three visits per month, including four relatively small meetings with the president and a dozen with other White House staffers. Stern has openly bragged about the SEIU's $61 million investment in Barack Obama. It certainly bought him a lot of access.