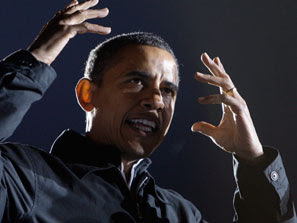 According to a report published by the New York Times, President Obama is privately venting venting about Fox to his state run media buddies. The fact that President Obama hangs out with Rachel Maddow, Keith Olbermann,, Maureen Dowd, Frank Rich and Bob Herbert is frightening enough even if Obama weren't venting about the only network independent enough to report many stories.

Speaking privately at the White House on Monday with a group of mostly liberal columnists and commentators, including Rachel Maddow and Keith Olbermann of MSNBC and Maureen Dowd, Frank Rich and Bob Herbert of The New York Times, Mr. Obama himself gave vent to sentiments about the network, according to people briefed on the conversation.

“If you’re not catching flak,
you’re not over the target.”

Fox News is over the target.
Posted by Bluegrass Pundit at 5:41:00 AM