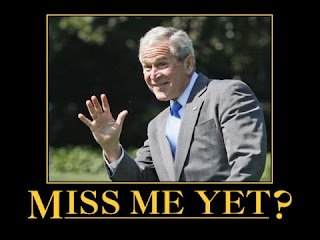 For the first time, President Bush has a high Presidential Approval Rating than President Obama.

George W. Bush’s job approval rating as president has spiked to 47 percent, according to a Gallup poll released Monday.

This is the first time Gallup asked Americans to retrospectively rate Bush’s job performance. And it was a stunning turnaround from his low point of 25 percent in November 2008. The 47 percent number is 13 points higher than the last Gallup poll taken before Bush left office in 2009 and the highest rating for him since before Hurricane Katrina in 2005.

Considering what Bush did to America, pollsters are intentionally playing loose with their short term memories.