There are many mysterious things about Barack Obama. Why does he hide his long form birth certificate? Was he adopted by Indonesian Lolo Soetoro? Was he a registered foreign student at Occidental college? How did he travel to Pakistan as a young man and what did he do there? How did he get into Harvard and who paid his tuition? What was his relationship with convicted terrorist Bill Ayers? How did a man who had never wrote anything of significance, before or after,  write the bestselling book "Dreams of My Father?" In addition to these questions, we now must ask, "Why does Obama have a social security number that on first glance appears to be potentially fraudulent."

Protectourliberty.org ran the ad, embedded below, in yesterdays Washington Times.

You may wonder how we know this is the correct number for Barack Obama. If you know someones social security number, last name and birth date, you can pull up their selective service record at this government website. Here is a screen capture for Obama's number. 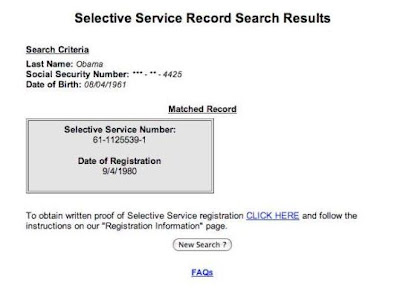