After negotiating with Iran, Obama is downgrading relations with the Vatican... 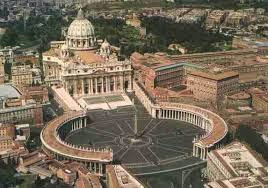 Is Obama returning to his Muslim roots?


The Obama administration, in what’s been called an egregious slap in the face to the Vatican, has moved to shut down the U.S. Embassy to the Holy See — a free-standing facility — and relocate offices onto the grounds of the larger American Embassy in Italy.
The new offices will be in a separate building on the property, Breitbart reported.

And while U.S. officials are touting the relocation as a security measure that’s a cautionary reaction to last year’s attacks on America's facility in Benghazi, several former American envoys are raising the red flag.

It’s a “massive downgrade of U.S.-Vatican ties,” said former U.S. Ambassador James Nicholson in the National Catholic Reporter. “It’s turning this embassy into a stepchild of the embassy to Italy. The Holy See is a pivot point for international affairs and a major listening post for the United States, and … [it’s] an insult to American Catholics and to the Vatican.”