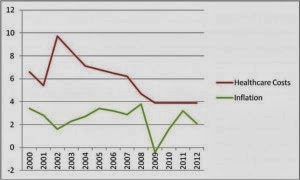 Obamacare imposes a 40% tax on health plans that are deemed to be too generous. This is the so called Cadillac tax and it goes into effect in 2018. Most people don't have this level of plan. The exceptions are mostly some unions and Obama may grant them another exemption. Here is the problem for everyone else. The Cadillac tax is indexed to inflation. Inflation for the general economy is much less than inflation for medical care. Your Chevy plan may be a Cadillac plan by 2018 if nothing changes. Companies are analyzing this now and may be forced start downgrading their employee health insurance.


For 75 million Americans who get their insurance through large companies, the Affordable Care Act is a mixed bag. Experts tell NBC News the new healthcare law is only slightly increasing premiums next year, but causing some companies with the most generous plans to reduce their employees’ benefits.
Aaron Baker, 36, his wife Billie and their two young children are covered under a generous health insurance plan offered by the private Midwestern university where he’s worked for 10 years. When they opened their benefits notice this year, they were pleased to see their $385 premium is only up by four dollars next year. However, they were shocked to discover that instead of covering the first dollar they spend with no deductible, the Baker’s plan now includes a $1,000 deductible and a $2,500 out of pocket maximum. They also will still have small co-pays for services.
According to the enrollment notice, the changes are “to relieve future health plan trend pressure and to put the university in a position to avoid the excise tax that becomes effective in 2018.” The 40 percent excise tax—often called the “Cadillac tax”— is part of Obamacare and is levied on the most generous health plans. It’s designed to bring down overall health costs by making companies and workers more cost-conscious. The thinking is that if consumers have to pay more expenses themselves, through higher deductibles and out-of-pocket expenses, they’ll avoid unnecessary or overly costly procedures. And that is supposed to make care more affordable for everyone.
Billie Baker doesn’t think much of that concept. “I think that saying that your insurance is too good so we’re going to give you a penalty,” she said, “is sort of outrageous to me.”