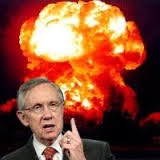 Democrats will regret this when Republicans control the Senate and White House...


Senate Democrats bowled over Republicans on Thursday to win approval for a highly controversial rule change which would limit the GOP's ability to block nominees, in a move Republicans called a "raw power grab."
"It's a sad day in the history of the Senate," Minority Leader Mitch McConnell, R-Ky., said after the vote.
Majority Leader Harry Reid, D-Nev., moving quickly following days of speculation, used the so-called "nuclear option" to pass the change. Typically, major changes like this take 67 votes, but he did it with just a simple majority.
With Republicans fuming, the change weakens the power of the minority to stall nominations for top positions. Instead of needing 60 votes to break a filibuster, the change means Democrats will now need just 51.