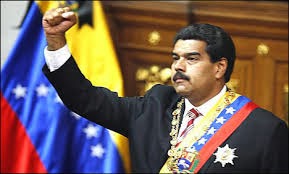 Barack Obama is most envious...


Nov 14 (Reuters) – Venezuela’s socialist government has arrested more than 100 “bourgeois” businessmen in a crackdown on alleged price-gouging at hundreds of shops and companies since the weekend, President Nicolas Maduro said on Thursday.
“They are barbaric, these capitalist parasites!” Maduro thundered in the latest of his lengthy daily speeches. “We have more than 100 of the bourgeoisie behind bars at the moment.”
The successor to the late Hugo Chavez also said his government was preparing a law to limit Venezuelan businesses’ profits to between 15 percent and 30 percent.
Officials say unscrupulous companies have been hiking prices of electronics and other goods more than 1,000 percent. Critics say failed socialist economic policies and restricted access to foreign currency are behind Venezuela’s runaway inflation.
“Goodyear has to lower its prices even more, 15 percent is not enough, the inspectors have go there straightaway,” Maduro said in his evening address, sending officials to check local operations of the U.S.-based tire manufacturer.