Unbelievable: Cancer patient who spoke out against Obamacare suddenly gets audited by the IRS... 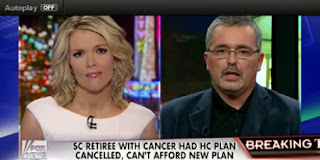 Is anyone surprised?  Under the Obama administration, the IRS has become a political tool.


Bill Elliot was a cancer patient who lost his insurance due to ObamaCare and couldn’t pay the expensive new premiums. He was talking about paying the ObamaCare fine, going without health insurance and “letting nature take its course.”
He went on FOX News where his story was picked up by C. Steven Tucker, a health insurance broker who helped him keep his insurance.
Now suddenly Bill Elliot is being audited for 2009 with an interview only scheduled in April 2014. Assuming he lives that long. That might be a coincidence, but Tucker is being audited back to 2003.
That’s a rather strange coincidence.
Keep on reading…