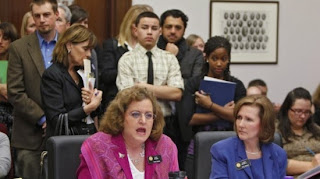 It's a dirty trick to allow demos to keep their one-vote majority in the state Senate.

Colorado state Sen. Evie Hudak (D), who was facing a potential recall election over her vote in favor of stricter gun control laws, will resign Wednesday, Denver television station KDVR reported.
Hudak’s decision assured that Democrats would hold onto their one-vote majority in the state Senate, according to the TV station, with a Democratic committee being allowed to pick her replacement.