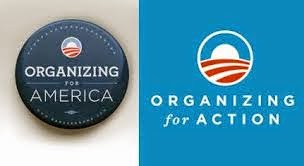 If they will be shorthanded in the future, I volunteer to operate Barack Obama's Twitter account for them.


WASHINGTON (AP) — Organizing for Action, the advocacy group supporting President Barack Obama’s agenda, is scaling back its fundraising efforts and cutting its paid staff in half as focus shifts to the approaching midterm elections, three Democratic officials said.
Formed last year from the remnants of Obama’s vaunted re-election campaign, OFA raised more than $30 million in its first 15 months as it worked to build support for Obama priorities like health care, immigration and climate change. But the group’s aggressive courting of big-dollar donors has troubled many Democrats who worry that OFA is siphoning sorely needed dollars from Democratic campaigns just as the party is bracing for a difficult election.
As of May 31, OFA will no longer solicit high-dollar contributions, according to an email obtained by The Associated Press. Kathy Gasperine, the group’s development director and a former Obama fundraiser, told top contributors it would “not be giving significant priority to seeking out new major donors.” [...]

Email ThisBlogThis!Share to TwitterShare to FacebookShare to Pinterest
Labels: OFA