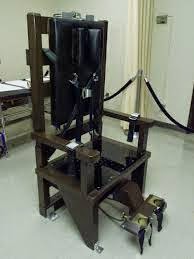 One of the favorite tactics of death penalty opponents is to claim the method is 'cruel and unusual.' In response to this, most states have switched to lethal injection. The drugs needed for this come mostly from countries opposed to the death penalty. That are refusing to sell them. This leaves states with no choice but to reconsider firing squads and the electric chair.


(CNN) -- Gov. Bill Haslam on Thursday signed a bill allowing Tennessee to electrocute death row inmates when the state is unable to obtain lethal injection drugs. With the governor's signature, Tennessee becomes the first state to make it mandatory to use the electric chair when lethal injection drugs are unavailable, said Richard Dieter, the president of the Death Penalty Information Center.

"This is unusual and might be both cruel and unusual punishment," he said.

Other states allow for use of the electric chair, but at the inmate's discretion.

"No state says what Tennesse says. This is forcing the inmate to use electrocution," according to Dieter, who believes "the inmate would have an automatic Eighth Amendment challenge."