Secretary of State John Kerry asks if global warming is fake, "what’s the worst that can happen?" 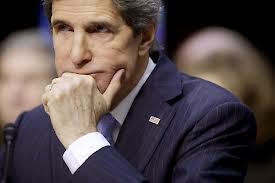 The world could waste billions trillions of dollars and damage economic growth based on a fraud?


Secretary of State John Kerry did not shy away from pejorative language when addressing "climate change" in his commencement speech at Boston College on Monday.  Kerry referred to those skeptical of the Obama administration's climate claims as "members of the Flat Earth Society" who are "risking nothing less than the future of the entire planet"...[...]

If we make the necessary efforts to address this challenge – and supposing I’m wrong or scientists are wrong, 97 percent of them all wrong – supposing they are, what’s the worst that can happen? We put millions of people to work transitioning our energy, creating new and renewable and alternative; we make life healthier because we have less particulates in the air and cleaner air and more health; we give ourselves greater security through greater energy independence – that’s the downside. This is not a matter of politics or partisanship; it’s a matter of science and stewardship. And it’s not a matter of capacity; it’s a matter of willpower.