McConnell trounces Bevin in KY Senate primary, but can he win in November? 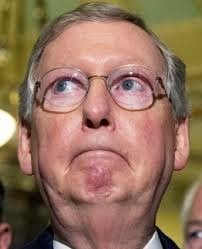 In February, Matt Bevin polled better against Grimes than McConnell. Mitch McConnell has poisoned his relationship with many conservatives and Tea Party supporters. It's unlikely they will turn out with enthusiasm for him. McConnell can't win without them.

The Associated Press called the race for McConnell right as polls closed at 7 p.m. in the Bluegrass State, where the Senate minority leader had a two-to-one lead over Bevin.

McConnell's victory sets up a closely-watched and expensive contest against Secretary of State Alison Lundergan Grimes, one of Democrats' best hopes at a GOP pickup this cycle. Grimes also easily won her nominal primary on Tuesday.

Tea Party groups, long frustrated with McConnell’s leadership, initially had high hopes for Bevin. He drew the backing of the Senate Conservatives Fund and Madison Project, among others, and SCF invested nearly a million dollars on his bid.