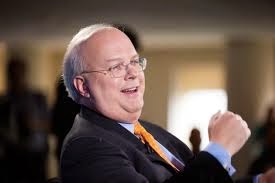 Karl Rove is the latest to speculate about Hillary Clinton and brain damage. After Hillary reportedly had a fall, she has been wearing glasses that correct double-vision.


Karl Rove stunned a conference when he suggested Hillary Clinton might have brain damage.
Onstage with Robert Gibbs and CBS correspondent and “Spies Against Armageddon” co-author Dan Raviv, Rove said Republicans should keep the Benghazi issue alive.
He said if Clinton runs for president, voters must be told what happened when she suffered a fall in December 2012.
The official diagnosis was a blood clot. Rove told the conference near LA Thursday, “Thirty days in the hospital? And when she reappears, she’s wearing glasses that are only for people who have traumatic brain injury? We need to know what’s up with that.”
Rove repeated the claim a number of times to the audience. Clinton’s rep said, “Please assure Dr. Rove she’s 100 percent.”