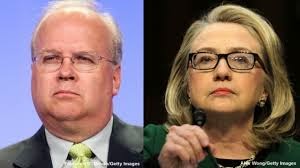 Rove has everyone talking about Hillary's age and health. This was sheer genius.


Karl Rove said on Sunday he had no regrets about his comments about Hillary Clinton's health.
“I’m not questioning her health. What I’m questioning is whether or not it’s a done deal if she’s running," the Republican strategist said. "And she would not be a human if did not take this into consideration. She’ll be 69 at the time of the 2016 election. If she gets elected and serves two terms, she’ll be 77.”
In a lively panel discussion on "Fox News Sunday," Rove, also a Fox News contributor, defended his comments on Clinton. Last last week, The New York Post reported Rove said the former secretary of state may have "brain damage" due to a blood clot she suffered in 2012. Rove has since said that he never used the phrase "brain damage," but has largely defended his comments as fair game when discussing a possible 2016 presidential run for Clinton. On Sunday, he said he had no regrets about his comments or handling of the situation.
When host Chris Wallace asked Rove whether he has questions about her "physical ability" to run for president, Rove said: “No, no, no, no. I don’t. I don’t. But I do think that it would not be human if you’re sitting there to say, ‘I’ve had a serious brain injury.’”
“A concussion by definition is a traumatic brain injury," Rove added later, saying that she dealt with a "serious health issue" for 30 days.