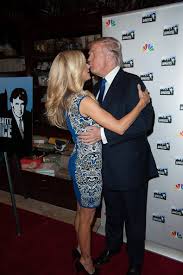 She said it was humor that Megyn Kelly took out of context.


She hadn’t even recalled the incident.
A former “Celebrity Apprentice” contestant and Playboy Playmate who was the subject of the “on her knees” remark made by Republican presidential candidate Donald Trump is coming to his defense.
During the GOP presidential debate Thursday, Fox News host Megyn Kelly asked Trump to explain a comment he made during a segment of his reality show that it would be “a pretty picture to see her on her knees,” referring to Brande Roderick, a contestant.
In a telephone interview on MSNBC’s “Live with Thomas Roberts” on Friday, Roderick said she hadn’t even recalled the incident.
“Like him, I didn’t even remember him saying that,” Roderick said. “I’ve always had a positive experience around Donald. He’s always been encouraging. He’s never been disrespectful to me.”
She added that Trump’s remark wasn’t made out of desrespect, but rather was an attempt at humor.
“I don’t condone men being derogatory, but I think he’s just on television. He’s trying to be funny. He didn’t mean anything horrible by it.”