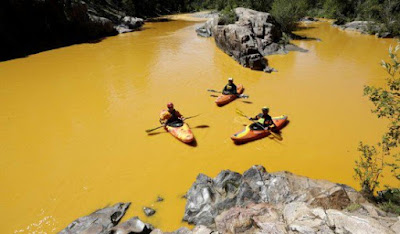 Will they issue a multi-million fine to themselves...


The U.S. Environmental Protection Agency was trying to protect the environment when it caused a major spill instead.
The EPA says it was using heavy machinery to investigate pollutants at the Gold King Mine on Wednesday morning when it accidentally released an estimated 1 million gallons of mining waste into a creek. The waste spewed from the creek into the Animas River north of Silverton, Colorado, turning the water an opaque orange color reminiscent of boxed mac and cheese.
“This is a huge tragedy. It’s hard being on the other side of this. We typically respond to emergencies, we don’t cause them,” David Ostrander, EPA’s director of emergency preparedness for the region, said at a community meeting held in Durango, Colorado on Friday afternoon. “But this is just an unanticipated situation that didn’t quite come out as planned.”
In response to an audience member, he added, “We’re asking ourselves the same question: What exactly happened.”

Email ThisBlogThis!Share to TwitterShare to FacebookShare to Pinterest
Labels: EPA