Obama: Killing humans and harvesting their organs is “craziness” unless you are Planned Parenthood... 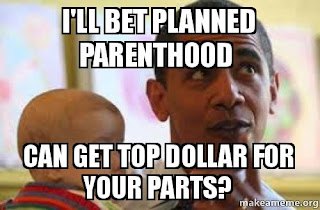 Obama is refusing to watch the Planned Parenthood videos...


President Barack Obama told a group of young African leaders on Monday that harvesting organs from humans that are killed as part of an African ritual was “craziness” and a “cruel” tradition that needed to stop. He warned of dehumanizing marginal groups of humans and of the problems that arise when “you are not able to see someone else as a human being.”
In a wide-ranging question and answer session with members of the Young African Leaders Initiative [YALI], a woman from Kenya said “Persons with albinism in Africa are being killed and their body parts harvested for ritual purposes. My request to you is to raise this issue with heads of state of African countries to bring these atrocities to an end.”