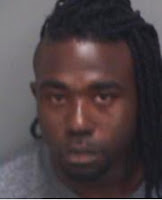 It doesn't go well for the moron...


AUGUST 1–A knife-wielding Florida man who attempted a carjacking Thursday night quickly discovered that the vehicle he targeted was an undercover cop car occupied by a pair of armed plainclothes detectives, according to an arrest affidavit.
Dominique Albert, 27, allegedly approached the car on a St. Petersburg street around 9:45 PM and yanked open the passenger door. Albert, pictured at right, leaned into the auto while holding a steak knife in his right hand.
While Albert’s would-be victims were initially startled by the interloper, they quickly rallied.
“Police!,” shouted Detective Daniel Torok from the driver’s seat as he drew his handgun and leveled it at Albert, who “turned and fled on foot.”
Torok and his partner then chased after Albert, who dropped his knife during the pursuit. When the cops caught up with Albert, he “fought Police with violence, but was finally taken into custody after a lengthy fight.” Albert, who allegedly continued to struggle after being handcuffed, stopped resisting after a backup officer “deployed his Taser.”