Tennessee school district is banning all flags; including American... 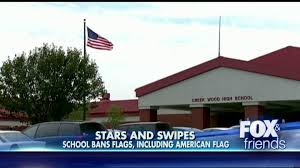 I thought people in Tennessee were smarter than this...


A Tennessee school district is banning all flags, including Old Glory.
School leaders in Dickson County decided, after a summer of controversy surrounding the confederate flag, the wise thing to do would be to ban all flags and banners.
Some students are angry as they feel their patriotism is being compromised.
School leaders said there is a right and wrong way to show American pride:
“It’s not an unpatriotic act by any means because we have a number of ways in which students do learn how to be patriotic and express American pride.”
One student said, “I just think that’s a right…it’s freedom of expression and I don’t think you should be able to take that away from us.”
Students said they were told they would get kicked out if they bring an American flag onto school property.
So far, school leaders say they haven’t had any issues.