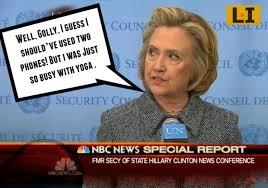 As uninformed as many voters are, I am surprised they have seen through Hillary's deceptions...


A Fox News poll released Friday finds a 58 percent majority thinks Clinton “knowingly lied” when she announced in a March press conference that no emails on her private server contained classified information.  A third says there is “another explanation” for internal government investigators determining secret info was in fact on Clinton’s server (33 percent).
Moreover, by a 54-37 percent margin, voters feel Clinton put our national security at risk by using a private email server.