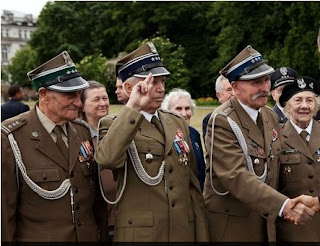 Uh, check out the uniforms?


Democrats’ election outreach efforts to veterans may need to start with a refresher course on what U.S. troops look like.
For starters, they don’t wear Polish military uniforms.
Until Thursday, the Democratic National Committee’s “Veterans and Military Families” website had as its only picture a shot from White House photographers during President Obama’s visit to Warsaw in 2011.
The president had been cropped out, but faces of four elderly veterans wearing European-style military uniforms were visible above several paragraphs asserting the party’s “commitment to America’s veterans.” The Polish military’s White Eagle insignia was clear on the headgear of two of the veterans.