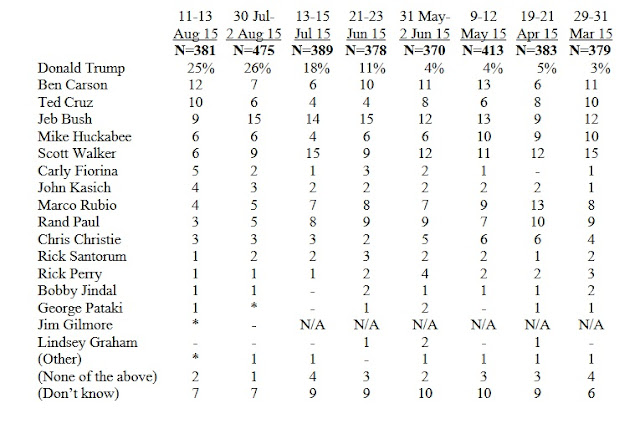 Jeb Bush is the big loser...


Businessman Donald Trump still leads the field for the Republican nomination.  He gets 25 percent among GOP primary voters.  He was at 26 percent before the debate.  Trump’s support among women went from 24 percent two weeks ago to 21 percent now.  He mostly held steady among men (28 percent).
The real-estate mogul maintains his first-place status despite also being judged in the poll as having the worst debate performance and being considered the least likeable Republican candidate.  More on that later.
The August 6 Republican presidential debate was hosted by Fox News Channel in Cleveland.  Several of the exchanges at the debate remained in the news for days after.
Next in the GOP race is Carson, who garners 12 percent.  That’s up five percentage points since the debate and puts him in double-digits for the first time since mid-June.  Cruz captures 10 percent, up four points.