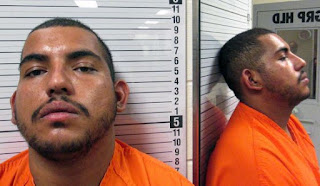 Jesus Yeizon Deniz Mendoza was arrested for burglary earlier this year, but not deported because he had already gained legal status. Why did Obama let Mendoza in legally? We should lock Barack Obama up with him.


The man accused of killing two Good Samaritans who tried to help him on a Montana roadside was encountered by immigration authorities earlier this year after a burglary arrest, but was unable to be deported because he had already gotten legal status, federal authorities said this week.
The horrific killing has drawn attention at a time when crimes committed by immigrants are a hot political topic, thanks in part to GOP presidential candidate Donald Trump’s claim that Mexican society sends bad elements to the U.S.
Jesus Yeizon Deniz Mendoza, an 18-year-old Mexican man, has been charged with the killing of Jason and Tana Shane, who saw him stopped on the side of the road Wednesday and tried to help him. When they showed up on the scene with their daughter, Mr. Deniz pointed a gun at them and demanded money, according to an FBI affidavit filed in the federal court case.