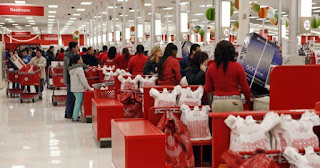 So, customers will have to wander around looking for the men's section? Geez. I dumped Target several years ago when they banned the Salvation Army bell ringers at Christmas...


Target Corp. is removing gender labels from most of its children’s departments after customers complained about signs designating certain toys for girls.
The kids’ bedding section will no longer feature boy and girl signage, and the toy department will be without labels and pink or blue paper on the shelves, Minneapolis-based Target said on its website Friday. Gender labels will remain in the kids’ clothing section because of sizing and fit differences.
Retailers have been moving away from gender stereotypes, and some startups have emerged to break down the divide in kids’ clothing and toys. The signage that sparked the dispute at Target was for building sets, like GoldieBlox, that are targeted at girls.
“As guests have pointed out, in some departments like toys, home or entertainment, suggesting products by gender is unnecessary,” Target said. “We heard you, and we agree. Right now, our teams are working across the store to identify areas where we can phase out gender-based signage to help strike a better balance.”
Keep reading